Skip to the content
by RHYS JONES
© 2023 Thinking Out Loud

One of the last adventures I had during my gap year was also one of the most exciting. The last stop on my travels was in Cape Town, South Africa. It greeted us (me and my South African friend Stephen) with extremely low clouds and a good 10 degrees less warmth than Johannesburg, whose winter sun was wonderfully snug. Cape Town, unfortunately, was experiencing its rainy season; and for most of the week or so that we were there we were graced with pretty wet weather (our trip to Robben Island was cancelled due to high winds). We barely saw the straight edged crown of Table Mountain as it was so frequently shrouded in cloud.

There was one day, however, where the forecast promised at least a semblance of decent weather. It was a Thursday. This was, we decided, the day we would at least try to get to the top of the Tafelberg – that way, hopefully, we’d actually see something more than fog. So we pencilled that in for Thursday and proceeded to do more indoor things on the preceding days: things like going to a wine tasting and finding out that Stephen actually doesn’t really like wine and that (in the interest of not having any go to waste) I would need to drink both our rounds…

In any case, Thursday came around and the day started much like other days: overcast, a little chilly. In a bit of a pickle, we decided that we’d go to the Kirstenbosch botanical gardens, which lie on the inland-base of the mountain and at the start of one of the paths up the mountain which our B&B host said he used to run up when he was “our age”. So off we went, to Kirstenbosh, which is beautiful and filled with wonderful plantings. Some time around midday, the sky began to clear and we were greeted with a remarkably warm sun; the clouds started to evaporate off of the mountain and we decided it was ‘now or never’.

The great thing about Kirstenbosh is that you can actually begin the ascent directly from the gardens themselves, by taking the rear exit. So we began our climb up the ominously named Skeleton Gorge (remember, this is the route that our 70-odd year old host had said he’d run as a teenager). We would climb up this side and then take the cable car down the ocean side. This seemed sensible as walking up is always easier than walking down.

So it began. The first part was in a wooded area; starting off relatively flat before transforming into steps. We were following a small stream; this was the gorge, we assumed. So far so good.

The terrain quickly changed, though. The steps became ever steeper skirting around wet rock and mossy trees, and soon we were seeing signs warning of the strenuous climb. “How hard can it be?” I thought, and so we continued; these places always have signs warning off unsuspecting tourists in inappropriate footwear.

Unfortunately, we fit the stereotype…we soon encountered a series of wooden ladders, wet and slimy with moisture. But we had come this far and weren’t going to be stopped; surely it couldn’t get any worse than this.

Well. After the ladders, we were left somewhat stumped. The path sort of began to disappear; on one side was a sheer cliff-face, on the other, the stream, now a raging mountain brook. The path seemed to take us up part of the cliff face; certainly, there were ropes and cables attached. So we climbed the really rather steep and wet rocks. At the top, we were faced with another dilemma: it seemed now that the only way to continue was to walk up the gorge-stream. Turning back seemed worse: getting down the cliff-face would be positively life-threatening. So we continued; I picked a way amongst the rushing water, on the rocks, trying to stay as dry as possible. This continued for a while: at one point I wondered if we’d gotten so far from the actual path that we’d never find it again. Still, we persevered, as it’s always easier to climb up than it is down, up the stream. Eventually, we came across the path: it emerged from the water and diverged from the stream and zig-zagged up the mountain. Phew.

What had happened, we realised, is that thanks to the wet weather of the preceding week, the normally quite harmless gorge had turned into the river that had carved the very gorge itself out of the mountain. Oops.

In any case, we quickly emerged out of the cool woodland and into a different and altogether drier ecosystem with proteas and grasses. And we saw our first views of the townships of Cape Town. At this point, we were about 700 meters above sea level, with another 300 or so to go. We followed the path: the sun was still out, it was lovely. Then we reached a split in the paths.

Like the silly tourists we were, we hadn’t packed a map. I have no idea why. I assumed it would be adequately marked; my experiences on Snowdon, at least, had been of a mountain-highway. This was not the case here: we hadn’t seen anyone else since the botanical gardens, and the signage there was directed us merely to different places names; we had no idea where we were going. So I chose the path that seemed to go in the right direction and we continued walking.

The weather began to turn again; at this point it was 2 or 3pm, and the clouds were moving in again, the weather got colder and it was altogether windier on the mountain itself. On the path to who knew exactly where, it soon struck me. The cable car had already been closed once this week due to high winds; what if it was once again closed and we ended up stranded on a mountain? What would we do?

At this point, we were still several kilometres away from the cable car at least, and the nature of the mountain and its length meant that we could not see the cable car yet to check if it was actually working. So here I was, planning what we were going to do if we couldn’t get back down: would we walk the same route back down Skeleton Gorge? This seemed too dangerous to me. It would take us several hours, and it’d be dark by the time we got to the Gorge: and I did not want to reverse down there, even in daylight. I considered other paths: there’d be other ways up, with potentially less steep gradients. And finally, I hoped that the cable car station complex, which had a restaurant and shop, would have an emergency shelter. For an hour, we nervously kept walking, wondering when we’d get remotely close to find out our fate. Eventually, we passed the tallest point upon the mountain: at that point, the signage got a bit better and we found the correct route towards our only hope.

And then – out of nowhere – we rounded a corner and were greeted with a majestic view of the Lion’s Head Mountain and the ocean. And there – just there, in the distance, ran the cables of the cable car. Not a cable car in sight first – but we waited a few minutes, in literally baited breath. And then – there – the little blob of a people-carrying lift. Wow. What a weight off our shoulders. I was pretty excited about that. From then on – and we still had a way to go – our pace was invigorated, a little bouncier. We weren’t going to die on the mountain!

Once we reached within 500m or so of the station, we began to see human life again. It seems that most people (in all their wisdom or inadventure – you choose), did not roam that far. Still, our long journey and trepiditious adventure filled us with a sense of achievement – we had seen the real Table Mountain, had traversed its varying ecosystems, had seen so much more than these people and had, in hindsight, had the greatest view of all – that of the Lion’s Head and Cape Town central. And to our delight, the sun came out to greet our victory over the mountain…The moral of the story? If you’re going to do something ambitious, at least be prepared for it!

Has it put me off Table Mountain? Definitely not. If anything, it’s made me keener to return to the beautiful city of Cape Town in less inclement weather and enjoy everything it has to offer. I’ll be back. 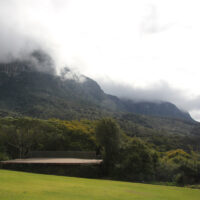 The view of Table Mountain from Kirstenbosh 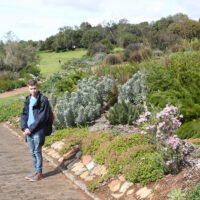 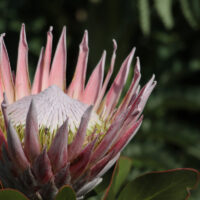 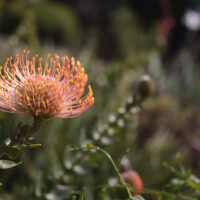 It was nice when we started… 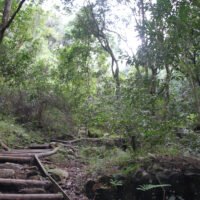 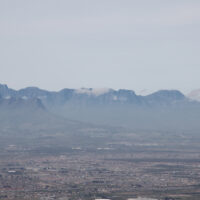 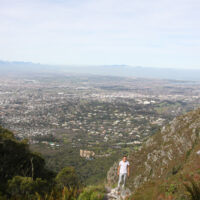 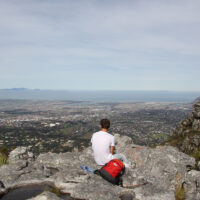 Enjoying the view after Skeleton Gorge 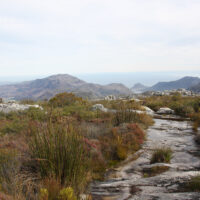 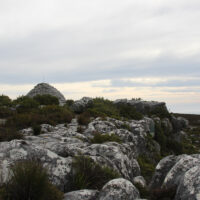 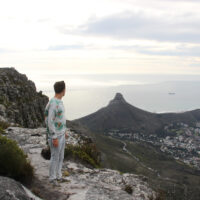 The greatest view of Lion’s head 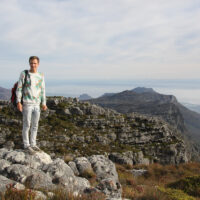 This is where the tourists take their photos 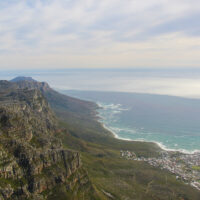 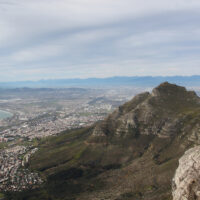 Looking back down the length of the mountain 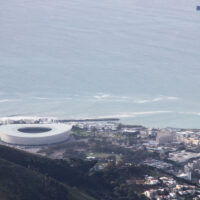 The Cape Town Stadium used in the 2010 Football World Cup